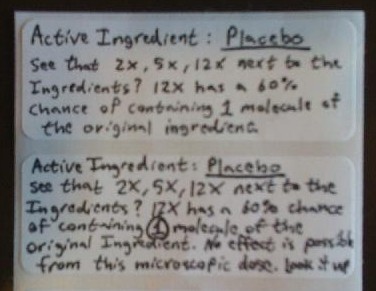 You may not be able read this, but this is my first attempt at vandalism. Vandalism in the name of good science, of course. If you stay with me until the end, you will see why I did it, I promise. These are a set of stickers that I made up to put on the back of homeopathic medicine boxes in my local Walgreen’s. They read:

Active ingredient: Placebo—See that 2X, 5X, 12X next to the ingredients?  12X has a 60% chance of containing 1 molecule of the original ingredient. No effect is possible from this microscopic dose.

Before you report me to the authorities, a little background…

Homeopathy is a brand of pseudoscience that was first proposed by German physician Samuel Hahnemann in 1796. He believed in the principle of “like cures like”. The theory being that an ailment can be cured by using parts of that ailment to cure you. This at first sounds legitimate, thinking about how we inoculate people against a virus by using a small, dead portion of that virus. But unlike vaccination, which is founded on good science accompanied by evidence, homeopathy is founded on bad science with no evidence.

Let me explain further. They way that Hanemann interpreted his theory of “like cures like” was to take small portions of the aliment, and dilute them to the point where there maybe only 1 molecule of active ingredient remained in the treatment. Let me restate that: in many homeopathic treatments, there is less than or equal to 1 molecule of active ingredient. The treatment then becomes effectively water, or a sugar pill. If you still aren’t relating to the gravity of this dilution, I have a chart for you:

Yes, it’s true. There is effectively no active ingredients in homeopathic medicine. You would receive as much benefit from a bottle of Fiji as you would from this treatment. So why do people still swear by it? It’s called the placebo effect. By now everyone knows of this example:

If you had a headache, and a doctor handed you a pill that he said would cure you, your belief that you were going to get better would do just that. It would make you get better, even if the pill was pure sucrose [sugar].

When you are sick, you adopt all of the mannerisms consistent with a sick person. You feel tired, you sort of hobble around, dreary eyed, telling everyone you feel sick or are sick. When taking a placebo that you truly believe will cure you, you begin to stand up straight, you try to breath better, you feel more alert, because that is what healthy people do. This unconscious act will work well enough to alleviate mild symptoms from headaches to sinus problems. It is exactly the same with homeopathic treatment; if you really believe that it will help you, it will, but not because of any efficacy. We have already looked at how there is literally almost ZERO medicinal content in these treatments [see chart above], if you really don’t want to believe me, try tricking yourself into a cup of water that will cure your symptoms, it will save you more money that way.

So, back to my vandalism. Using the stickers I showed at the beginning of this post, I went into Walgreen’s and found the homeopathic section: 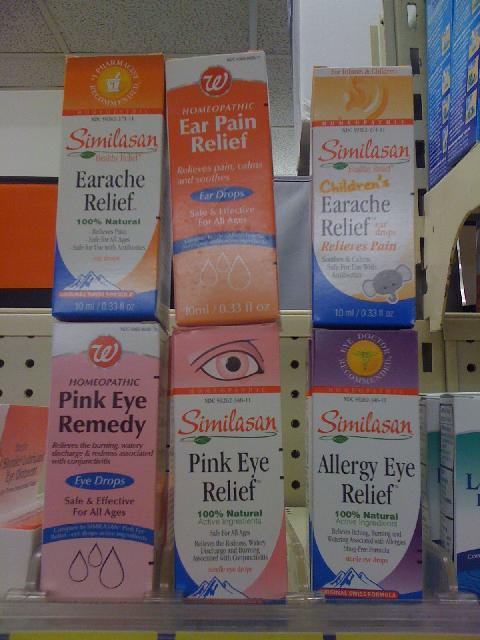 I tried to remain stealthy and nonchalant like I was listening to my headphones while doing the deed. With great care I removed the stickers from my pocket, which I had disguised as a shopping list. As quickly and as catlike as I could, I slipped the stickers onto the back of the boxes, carefully checking and rechecking my peripherals. Yes, this technically was vandalism, but I’m just trying to get good science out to the public. A lot of the dilution nonsense that is the foundation of homeopathy is not readily known in society. I certainly do not consider anyone moronic or cretinous for using these “treatments”, I simply want to present them with the information necessary for them to see that they are wasting their money and supporting bad science. 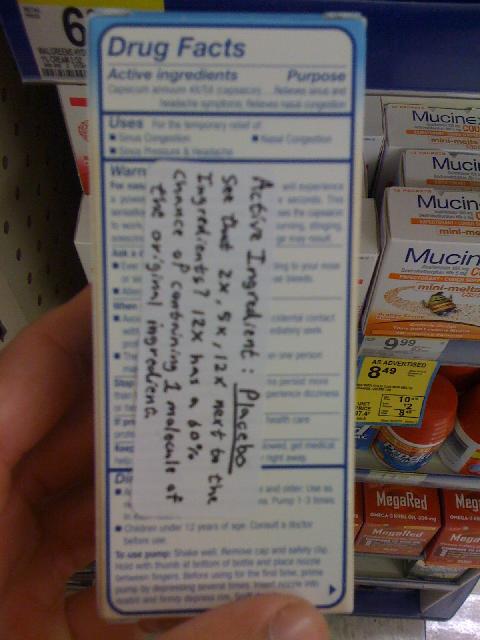 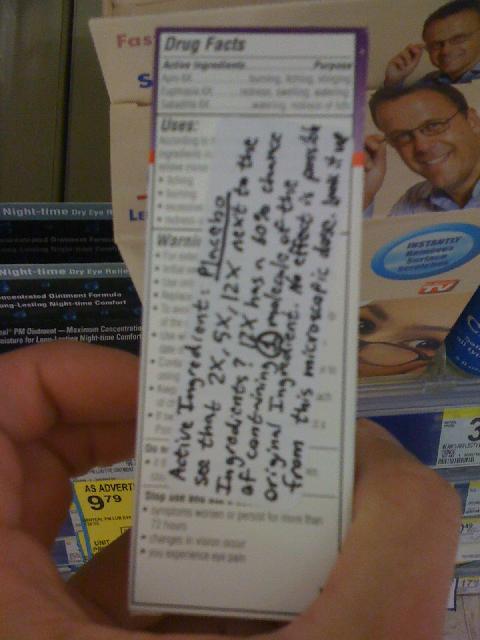 People still use homeopathy regardless of these claims [although I hope my arguments and the table above sheds at least a little light]. You might ask, what is the harm of letting these people use these treatments? Even if they are wrong, who is it hurting? Well, my problem with homeopathy is threefold.

Isn’t science supposed to be the bastion of truth? Do we not look to science to put men into space, to develop our civilization, and to save lives? Why is it acceptable for good science to tolerate something like homeopathy? I find the problem is that the knowledge [like the chart above] isn’t at the fingertips of the user. Homeopaths have discovered that if you put “100% Natural” on your box, people won’t question how you make your product. The second step of questioning the product is too far beyond our demand for instant information that we largely ignore it. Homeopaths take advantage of the fact that people find natural products somehow always better in their minds, and use that to sell what is basically water or sugar. The United Kingdom has recently called for a ban on homeopathy, because a complete review of the evidence showed no efficacy for any homeopathic treatment. UK doctors call homeopathy itself witchcraft.

Second: You Are Wasting Your Money

People also tend to rely way too much on their subjective experiences and anecdotal evidence. Hearing that homeopathy works from a friend is commonly all one would need to be sold on the matter. It is sometimes hard to take a step back and see what you have gotten into. It is hard to see in the picture above but these relatively small sized “remedies” were being sold for as much as $15 each. Why not buy some Tylenol? Not only will it actually help you, it is cheaper, and it has working ingredients in it (you don’t have to say that about real medicine do you?).

In all seriousness, this sort of delusion thinking has lead to people’s deaths. Take this case:

Perth’s Penelope Dingle, the wife of prominent Perth environmental and nutritional toxicologist Peter Dingle, agreed to be treated with alternative therapies and refused to have surgery to remove the cancer soon after she was diagnosed in 2003. Instead, she adhered to a strict diet and regular homeopath treatments before becoming so unwell she had to have emergency surgery to remove a bowel obstruction.

By this stage, the cancer had spread and two years later, in 2005, Dingle died from complications of the cancer.

Giving evidence at Dingle’s inquest yesterday before West Australian Coroner Alastair Hope, her sister Toni Brown said seeing Dingle in 2003 was like watching “somebody being tortured”.

[…] the Coroner may make recommendations for the regulation of homeopathy.

This itself is anecdotal, but I have used it to highlight the evidence that homeopathy doesn’t work. Another line of evidence is a little more obvious. James Randi, founder of the James Randi Education Foundation [a skeptic organization promoting science and reason over the paranormal, pseudo scientific, and the supernatural], gives a lecture every year in which he denounces homeopathy. How does he make his point? He obtains a bottle of maximum strength homeopathic sleeping pills, and ingests the entire bottle (about 80 pills) at once. Needless to say, he does this every year, so that again means…homeopathy doesn’t work (now you’re getting it!).

A great site called What’s The Harm has tallied up individual cases in which homeopathy [and many other pseudoscience modalities] have harmed or killed people. And, I must point out, a large number of victims of these cases of death and injury, are infants.

Do you still not buy it? I have laid out legitimate facts and evidence, I have shown real doctors calling it witchcraft, and explained why people think it works. I know that my treatment of the boxes in Walgreen’s is a little childish. But it is a little necessary too, where else will people get the information? This is a small blog; my only mouthpiece. I am not a politician or practicing doctor. But I feel a strong moral obligation to at least ask people to question what they use to treat themselves and their families.

I do not find the retardation of science’s progress funny, I do not find the scamming of people out of their money with buzzwords like “natural” and “organic” ethical, and I do condemn any parent/friend/sibling/person who would ignore a doctor in order to pursue water as a cure for a child like Gloria Sam, who had perfectly treatable eczema, which consequently led to her death.

11 thoughts on “I am the Homeopathy Vandal!”