In a fascinating post from XKCD on what would happen if a 100 foot diameter diamond impacted the Earth at light speed, I stumbled on a fascinating bit of science.

According to the physics involved, a high-velocity object, even city-killing-meteor size, will only punch out a hole about as deep as its height.

Now, there are numerous caveats to this (one being that if the object travels too fast it will annihilate the Earth), but the physics is interesting enough in the ideal case that I thought I’d share it with you.

According to Isaac Newton, two objects impacting each other is basically just an exercise in momentum transfer. An object gathers momentum as it travels, and this is proportional to its mass. The more massive the object or the faster it goes, the more momentum it has.

So, a small, fast-moving object could impact a large object and move it (much more slowly). For more examples of these interactions, start here.

But back to impacts. What happens when an object traveling faster than the speed of sound hits the ground?

Let’s imagine that a cylinder-shaped meteor has just passed through the atmosphere and is hurtling towards the earth. 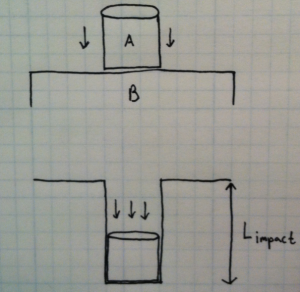 When this oddly-shaped Earth killer hits the ground, it transfers its momentum to the dirt. According to the equation above, the meteor will stop when it has transferred all of its momentum.

The meteor is traveling so fast that the “stickiness” of the dirt and gravel and bedrock particles, its cohesion, doesn’t matter. The meteor punches a near-perfect cylindrical hole in the ground.

Another assumption we have to make is that, because there is no cohesion in the ground, the meteor will push material out of the way at the speed it is traveling. If we factor this into our momentum equation, we get:

Now only the mass matters. What this means is that in order to stop the meteor needs punch out it’s own mass of Earth.

In the picture above we make the equation easier by substituting density in for mass, and changing volume (L^3) to surface area impacted (the bottom of the cylinder) multiplied by depth (cylinder or impact hole).

If we put all of this back into our very first equation we get:

If we solve everything for the depth of the impact hole, we get (finally):

Assuming that the impact object is moving super-freaking fast, and remembering the other caveats, we could use this equation to approximate how deep a crater something like a meteor would make.

If the densities are similar, even an object hitting the Earth at 11 kilometers a second will only bore down roughly its own height.

As Wikipedia notes, however, there are a number of additional caveats:

This approach only holds for a blunt impactor (no aerodynamical shape) and a target material with no fibres (no cohesion), at least not at the impactor’s speed. This is usually true if the impactor’s speed is much higher than the speed of sound within the target material. At such high velocities, most materials start to behave like a fluid. It is then important that the projectile stays in a compact shape during impact (no spreading).

Of course, you could just ignore all of the physics and enjoy watching slo-mo impacts like this one: