Yesterday I watched Felix Baumgartner courageously step out of a capsule 24 miles above the Earth’s surface, survey the world below, and jump.

I watched the entire event from the beginning. As the time until the jump drew nearer, I was joined by 7.3 million other streamers (the most widely watched event in YouTube’s live streaming history), anxiously watching the altimeter climb. The tension became palpable once Felix was led through his 20+ point checklist, and we watched him fiddle with mirrors and valves and cameras.

There was a moment, as Felix was depressurizing the capsule to the near-zero outside atmospheric pressure, that I checked myself. “This is amazing,” I muttered while turning up the volume, increasing my screen’s brightness, and hitting the “full-screen HD” button. I shifted in my seat, rubbing my eyes as if that would get me closer to his experience.

My urge to share my feelings with the world overcame me. Once I saw what Baumgartner would shortly see, I had to say something:

Perhaps I got a bit too exited:

Baumgartner was complaining that the door to the capsule wouldn’t open, and I felt the horror and curious fascination of knowing that I might see something go terribly wrong. Thankfully, the previous record-holder for the highest jump and Baumgartner’s communicator in the Red Bull command center, retired US Air Force Colonel Joe Kittinger, reassured Felix that once he had fully vented the capsule, the door would indeed open.

And it opened. It opened as if forced by the urgency of Felix’s mission. That’s when the gravitas of the event really hit me. With the weight of half the Earth’s atmosphere now expelled to the near-vacuum of the stratosphere, Felix looked out onto the divide between our blue marble and the blackness of infinite space. I like to think that he could hear the collective gasp of the 7.3 million looking with him. 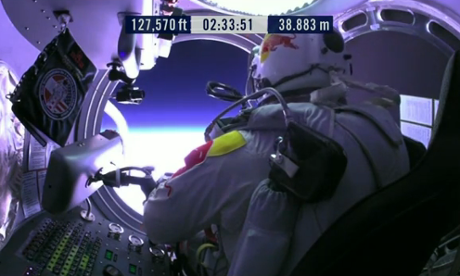 The beauty that Felix saw must have been amplified by the inevitable next step: the jump.

He lifted his legs, burdened by the bulky pressure suit, and slid his seat forward. Grasping the outside rails of the capsule, Felix stood up. He was about to be the realization of two powerful metaphors: a man standing above the world, and a man plummeting to Earth after gazing infinity.

Felix managed to get out a few muffled words before saluting both the 7.3 million watching with bated breath at their various screens and the world below. In that salute he said more than perhaps he ever meant to say; he was expressing a resilient and determined human spirit.

Without the slightest bit of acrobatics, he fell. It was more like the fall you see in movies, where the tortured hero casts himself uncaringly onto the rocks below the ocean cliff. Felix rapidly disappeared from the capsule’s cameras.

Even the infrared cameras on the ground, which had no problem keeping up with the ascent, struggled to keep tabs on the supersonic man.

Again, I had to share the enormity of the moment with someone:

It was hard to make sense of the 4 minutes and 20 seconds that Felix fell, but it was tense. The infrared cameras clearly showed that Felix had entered into a tail-spin shortly after he dropped from the capsule, the danger being that the intense forces would knock him unconscious. His muffled words were unintelligible. The anxiety of not being able to understand the words of a man rapidly approaching disaster was gut-wrenching. I could only imagine what his family, huddled in the far corner of the command center, was feeling.

After a few harrowing seconds, the infrared cameras also alleviated our fears. Felix had stabilized himself and was falling “in control,” an interesting concept in and of itself. We could finally make out what Felix had said before: his visor had fogged up. The minor problem that the command center had tried to troubleshoot during his ascent surely didn’t seem minor any more, given this near-miss.

Seconds later Baumgartner’s chute opened. The command center burst into applause. Felix’s family now had the wherewithal to look up at the screens, wiping away tears of joy to get a closer look at their soon-to-be triumphant hero.

Closer to the ground, helicopter cameras picked up Felix’s descent. The switch from infrared to normal cameras was a psychological marker of success. We didn’t have to squint anymore. There he was, falling the way he had done in his thousands of sky-dives. He was nearly safe; nearly a champion.

The fuss that Felix was making about the directionality of the wind was soon forgotten as he touched gently to the ground. While stumbling or crumpling to the ground would have been more than understandable, Felix stayed on his feet. He had done it.

But what really resonated with me wasn’t how he landed, but what we did afterwards. Baumgartner dropped to his knees in a pose that would be familiar to anyone who has seen the final point won at a Wimbledon final. He raised his hands to the sky in victory. I raised my hands with him, clapping at and shouting into my glowing piece of glass. And I bet I wasn’t the only one.

I could hardly contain myself. This seemingly arbitrary feat had pumped me full of adrenaline and chipped away at the barrier between impossible and possible. If you can actually get “high on life,” I definitely was feeling it:

And the Internet agreed:

All in all, Felix Baumgartner broke three records: the highest altitude ever achieved by any human in a balloon, the highest free fall jump, and the fastest man on Earth without any kind of mechanical propulsion.

Here are the official stats of his fall:

As a point of speed comparison for you nature nerds, science writer Ed Yong noted on Twitter:

And if you are curious, no, Felix didn’t experience anything shattering while breaking the speed of sound. From an article on Sports Illustrated:

Baumgartner said traveling faster than sound is ‘hard to describe because you don’t feel it.’ The pressurized suit prevented him from feeling the rushing air or even the loud noise he made when breaking the sound barrier.

In a press conference after the jump, Baumgartner said that he wanted to inspire a generation, that he wanted to eventually have some kid ask him how he could break the record. In a US without a manned space program, stunts like Baumgartner’s I think can do just that. It certainly inspired me.

The jump was partially a scientific endeavor as well. Writes Matt Pearce in the LA Times:

The human body, we now know, can survive a plunge from nearly two dozen miles high with the right equipment, which could have implications for astronaut and high-altitude pilot safety.

It was also a win for technology and social media. Half of the world’s trending topics on Twitter had something to do with the jump, eclipsing even NFL related tweets. For a brief period, I was connected to millions of others in a collective awe of one. No hitches; no technical hiccups. I journeyed with Felix to the top of the world, and cheered him on as he broke the sound barrier.

Many myths portray a tragic character, one that aims too high and pays the price. Felix was a real life Icarus. With wings supported by millions of cubic feet of helium and ambitions bolstered by the excitement of millions, he rose closer to the sun than any of us, terrestrially bound, could ever dream of rising. His wings didn’t burn, his ambitions weren’t extinguished by the sea. Felix did exactly what he set out to do and returned unscathed. A mythical fall from grace repurposed as a fall from space. Incredible.

But Felix didn’t do this alone. Years of preparation and careful study led to his success. Without the support of many and the advances of modern science, this would not have been possible. Far from being a publicity stunt, the public reaction to the man who fell speaks to the combined power of science and ambition to move us, to get us to reflect on what we can accomplish.

I’ll leave you with those muffled words from Baumgartner, as he prepared to jump:

I wish you could see what I can see. Sometimes you have to be up really high to see how small you are.

He saluted the world below, then leaped silently into the rarefied air.

6 thoughts on “The Man Who Fell”