This unfortunate arachnid is infected with Cordyceps, a parasitic fungus that replaces its host’s tissue with its own. 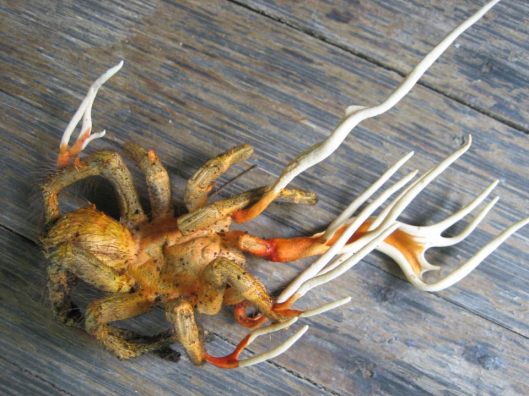 Cordyceps fungi invades its hosts (mainly arthropods), and eventually replaces the host’s tissue with its own parasitic tissue. Once the arthropod is dead, cylindrical or branching growths emerge from the creature’s dead body. These “fruiting bodies” that sprout out of the dead arthropod then spew out more spores to infect a new host. Some species also have mind-control capabilities, convincing the host to travel to a place where the fungus will find optimal growth conditions before the host dies. If you haven’t seen it yet, this video from Planet Earth shows a Cordyceps fungus in action:

How terrifying is that?