In fact, goldfish actually have very good memories for fish. They can be trained to respond in various ways to certain colors of light; different kinds of music; and other sensory queues. Not only that, but they seem to be able to remember things they are taught as much as a year later. Researchers have successfully taught goldfish to play fetch, push levers, do the limbo, and even play soccer (as well as they could). For elaboration: if they are fed around the same time of day, they will begin to anticipate the feeding, which implies they also have a very good sense of time. 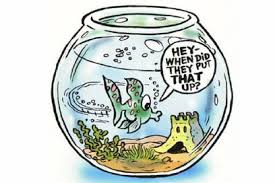 Goldfish also have been shown to be able to recognize their masters and even pick their “favorites” (usually the one who feeds them). Around certain people the goldfish is very familiar with, they will often be much more active when they see the person and even sometimes stop considering the person any sort of threat, including if that person sticks their hand in the water and tries to touch them. Around strangers, on the other hand, the goldfish will often hide. Blind goldfish also exhibit this same type of behavior, except they respond to the voice of their owner, similarly to how the non-blind goldfish respond to the sight of their owner.

In one experiment, researchers even got the goldfish to learn that if they pressed a certain lever at a certain time of day (for a span of about an hour), they would get food for this action. If the lever was pushed any other time of day, nothing would happen. In very short order, these goldfish learned to only bother pushing the lever during the time of day it would produce food; the rest of the time, they ignored it.

Smarter than you think

Because of the fact that goldfish are very intelligent for fish, experts recommend that you regularly change their fish tank around and make it as intricate and complicated an environment as possible with lots of things for the fish to interact with. Doing this has been shown to make the goldfish much more active and extends their average lifespan.

As noted, goldfish are a type of carp, specifically a less colorful version of carassius auratus.

Goldfish are one of many types of fish that will not stop eating if there is food available, regardless of how full they are. As such, overfeeding domesticated versions of the fish can easily kill them by blocking their intestines. This isn’t as much of a problem with certain types of wild goldfish, who have less complex intestinal tracts. In their case, when food is plentiful, they simply produce more waste.

Goldfish were first domesticated by the Chinese over a thousand years ago. The first record of some of the domesticated gray and silver carp producing orange and yellow offspring was recorded during the Jin Dynasty in 265-420.

Because yellow was an imperial color, in 1162 Empress of the Song Dynasty forbid anyone outside of the imperial family from keeping yellow goldfish, which is thought to be why the orange goldfish variety is more common today, even though the yellow variety is easier to breed.

Today there are over 125 different kinds of goldfish, thanks to selective breeding beginning over a thousand years ago.

The largest goldfish ever found was 19 inches, measured in 2008, and currently lives in the Netherlands.

[Reposted (with editing) from Misconception Junction]

3 thoughts on “Goldfish Do Not Have a 3-Second Memory”